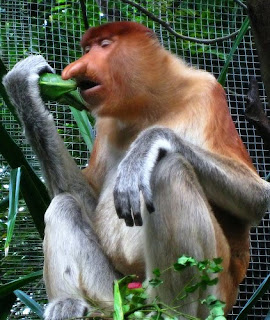 It is a commonly known fact that primates share a lot of our DNA and that can spook some people out.  has put together an article on some of the stranger looking primates that would have even the most arden Darwinists shrugging their shoulders and denying the fact.  Take a look for yourself!

Someone once said that if you had a million monkeys bashing away at a million typewriters then one of them - whether it took a long, long time, would one day type out the complete works of Shakespeare.  Thank goodness for the Internet - at least we know that much isn't true.

Anyway, go take a look at these primates.