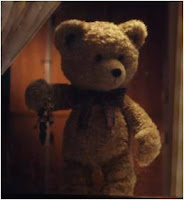 It is probably better than the show itself but this very clever promo ad for the MTV show Teen Mom shows a teddy bear protecting his 'owner' by hiding keys, turning down events on Facebook and various other nefarious deed which will ensure his charge remains safe.  If anyone would like to comment - which is best? The ad or the TV show?
Posted by RJ Evans at 17:21
Labels: Advert, advertisment, advertizing, Cool, funny, MTV, Shows, Teddy, Teenage, Teenage pregnancy, television
Newer Post Older Post Home