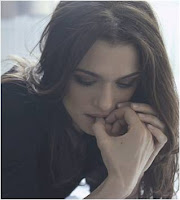 As if the stills that were used as spreads in Esquire were not, well breathtaking enough, here you have the opportunity to see them come to life.

Rachel Weisz has a beauty that transcends most Hollywood actresses - the type which enables her to star in a blockbuster like The Mummy one second and then appear as the female philosopher of ancient times, Hypatia in Agora the next.

So when we came across this video of her recent photoshoot for Esquire magazine which shows her at both her most sexy and thoughtful (surely she is the thinking man's ultimate sex symbol at the moment?) we just had to share! This was shot on the Red One with Mysterium-X sensor by Greg Williams.
Posted by RJ Evans at 17:03
Labels: Actors , Actress , Beautiful , Esquire , Hollywood , Photograph , Photography , Photoshoot , pictures , pictures of , Rachel Weisz , Sex Symbol , Sexy , Star , Video , Video of Photoshoot
Newer Post Older Post Home