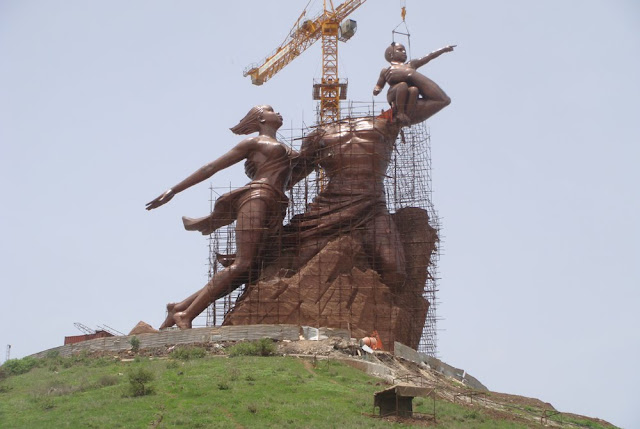 At one hundred and fifty meters in height the Monument to African Renaissance looms over the Senegalese capital of Dakar like a giant, loomy thing.  It was billed as a celebration of the continent’s renaissance but has become something of a scandal in the economically distressed African republic.

It is situated on the most western tip of the continent and, it was hoped, would become Africa’s most instantly recognizable monument – a kind of Statue of Liberty for the new millennia (and a good size bigger).  Unfortunately for the mastermind behind this colossal folly, Senegal’s octogenarian President Abdoulaye Wade the statue has offended a large part of the population of the country.  For a start, if you pan away from the monument, this is what you see. 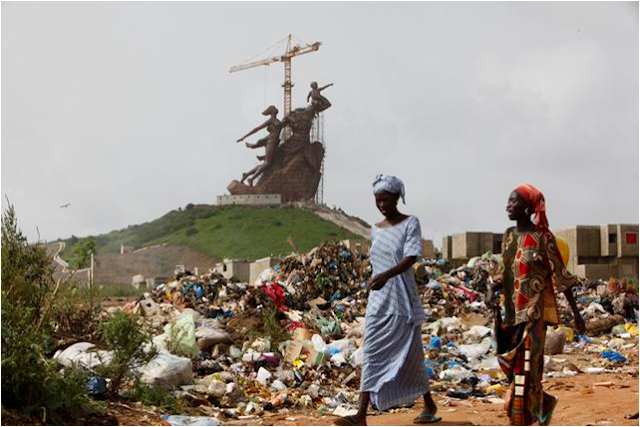 The locals living around the giant are suffering from an economic downturn that makes ours look like a Sunday School picnic.  Power cuts are frequent, food prices are rising to an all time high and floods regularly make large numbers of people homeless.  Instead of a celebration of their long road to freedom, many Senegalese look at the monument as something that goads them on a daily basis. 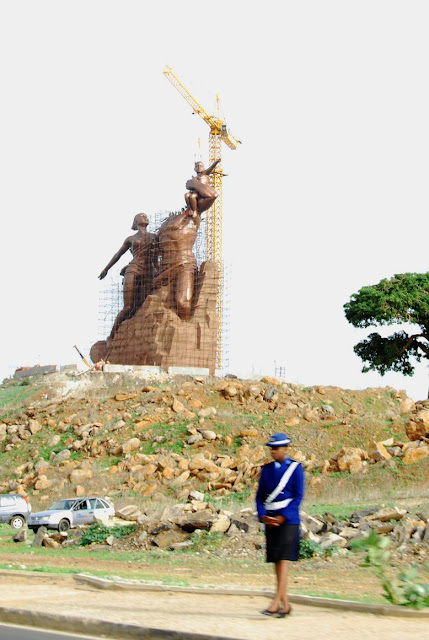 A little reminiscent of Soviet era statues (oddly enough, it was built by North Koreans) you may also think that those behind the statue are suffering from a large dose of good old fashioned megalomania.  Not only that, a large proportion of Senegalese are Muslim – ninety four percent to be exact.

Although they are not hugely radical in religious terms the bare breasted, skimpily dressed female is not to the taste of many.  At all.  As for the aesthetics of the piece – don’t even go there.

It is thought that the female figure may well have to have her modesty returned to her before the statue is 'unveiled' shortly.

It may not seem an awful lot, but to the cash strapped Senegalese that money could have solved quite a number of their ills.

The biggest irony is that a symbol of indepence and freedom from opression has been built by foreigners.

Perhaps in a decade, when the country has recovered and its people happier, the statue - and its worth to the nation and the world - can be judged properly.
Posted by RJ Evans at 16:56
Labels: Africa, folly, Renaissance, Senegal, Statue

That is dreadful, how thoughtless!

What a waste of money when these people desparately need help and to put it so close is a slap in the face. Excellent article RJ.

Perhaps in a decade ... can be judged properly...
Yeah, it will be destroyed either by a new government or by people.

They are building momuments while proverty stricken people exist! This place sounds like no other on Earth, except for America, China, and any other place on Earth.

its missing a thunderbolt.

now the irony here is if this gives hope sqeezing stone is cold and hopeless, your out of your league competing with usa and saudi in any area primarily strenght and wealth i have fallen victim to gross miss-management and i live basic in canada, even packed water for four years home to the farm, i live in poverty working, locals are right, if we give aid to your country we should adopt your poor and boycot your gouvernment and starve you fools, well it tells me once again a little man with a little brain in a little country spent millions and rccieved rock in return, i am an economic genious and if i had your 20 mill. i could make a 100 mill. in 5 yrs. in gold, your rock is worthless, well like most poor country leaders and incompetent ceo's like i deal with its mis-management at its best, good luck getting heads of state thier pics and emails is all you deserve

Why don't you guys research further?

I am amazed how fellow African are fallen victim to the dictates of the western world. we should remember that gold is not worth it until it is processed. No wonder we export all our natural resources in their raw state. the statue is a gold mine, let us join to make millions out of it. we have been given a hook, lets use it to fish instead of crying for food.