Ed Gein The Wisconsin Grave Robber and Butcher of Plainfield 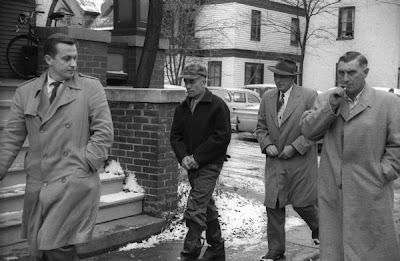 You may well have heard of Ed Gein (seen above centre in custody), but if you have not then take a look at this article, written by the current Queen of the macabre, The inspiration for a number of Hollywood movies, including Psycho and Silence of the Lambs, Mister Gein was not a very nice man at all, as the extract from the article below shows us. To read the rest, click on READ MORE.

In 1957 rural Wisconsin, the press was plastering the nightly news with stories of the boogieman. A psychologically flawed individual was practicing cannibalism and robbing bodies from local cemeteries. On one occasion, as noted by one of his neighbors, he shared fresh venison he had shot and killed the day before. Although, much to their surprise, it wasn’t venison at all.