Female Assassins and their Intended Victims

Equality is something that women (and their supporters) have striven for over centuries of male dominated history. Every now and again, though, the fairer sex let the side down. There is a lamentably short list of female assassins in the annals of history and – more often than not – they fail to kill their intended target. Perhaps that is nothing to be ashamed of, after all, and perhaps part of the proof we need to justify the pole position of the female as the gentler of the sexes. Here, though, are history’s female assassins and their intended victims.

1935, Tianjin, China. Sometimes the only way to kill someone is when they have their defenses down. So it was when Shi Jianqiao slipped in to a Buddhist temple and fired several shots in to Sun Chuanfang while he was praying. She then threw the gun down and explained her act to terrified and astonished onlookers. She had even taken the time to print up and copy a document explaining her actions. Chuanfang was not mourned. He had been involved in the repression of strikes in Shanghai, opium trafficking and a well known collaborator with the Japanese. Jianqiao was opposed to all of these actions. Oh yes, and he had had her father executed by decapitation and had ordered his head put on a pike for all to see. So, quite rightly she was angry – very angry. She was put on trial with three different courts handing out contradictory verdicts. With public opinion resoundingly on her side she was eventually released and was given a full pardon.

Ah, those Russians. The revolution was only sweet for the winners and Fanny Kaplan thoroughly believed that Lenin had betrayed the revolution as he had ordered the Constituent Assembly to be dissolved. On 30 August 1918 Lenin was speaking at a Moscow factory, dully named the Hammer and Sickle – no doubt taking a short break from trying to win the First World War. Kaplan was there with a gun. Three shots were fired – one went straight through Lenin’s coat. The other two hit his shoulder and his jaw. They did not kill him but it is thought that they were contributory to the stroke that killed him a couple of years later. No such luck for Kaplan, however. She was taken in to custody and when it became apparent that she would not finger anyone as accomplices she was shot – just three days later.

Fast forwarding a few decades and over to the continent of North America, the city of San Francisco is the center point for our next female assassin. Strange things have happened there, it must be admitted and some stranger than the events of September 22 1975. The then Presidential incumbent, Gerald Ford, was to find himself the target of the ire – not to mention the bullets of Ms Moore.


Obsessed with Patty Hearst, Moore had turned to revolutionary politics in 1975 – five husbands and four children were seemingly not enough to occupy her. A single shot from forty foot away from the President sealed her fate. She had been noticed aiming by a bystander and he had grabbed he arm, meaning that the bullet missed President Ford and ricocheted off a wall slightly injuring another bystander. Moore served thirty two years of a life sentence and was released in 2007 at the age of 72.


Politics. Crikey, it really gets people hot under the collar. So it was with Mademoiselle Corday. She was only twenty five when she had had quite enough with Marat, one of the leading Jacobins of the French Revolution and one who had instigated the Reign of Terror (and there is no hyperbole in its name either). He was a journalist who stirred up opinion in his newspaper; she was a member of a minor aristocratic family who was kinda fed up with her class ending up in the final caress of the guillotine. On 10 July 1793 she put her plan in to action. Getting access to Marat was easy – she told his housekeeper that she would be informing him of a plot against the state. She was admitted – approaching Marat in his bathtub (he had a skin condition and conducted many of his affairs from there). After giving Marat the names of the plotters she pulled out a knife and plunged it deep in to his chest, an act immortalized in much artwork. She herself was guillotined just a week later. Records maintain that her decapitated head was picked up, slapped on the cheek and the face registered a look of ‘unequivocal indignation’ at this post mortem attack.

Puerto Rican independence campaigners gained a heroine – and some notoriety – in an attack on the United States House of Representatives in 1954. On 1 March of that year she met up with a number of other Puerto Rican Nationalists and infiltrated the visitor’s gallery above the chamber of the House. After a quick rendition of the Lord’s Prayer, :Lebron screamed out “Long Live a Free Puerto Rico” and the group let loose with their guns. Around thirty shots were fired, wounding five, one seriously. She was released in 1981 and left for her native land where she continues, to this day, a proponent for a free and democratic Puerto Rico.

Although she didn’t pull the trigger Suratt was implicated in the assassination of Abraham Lincoln and was executed for her involvement. As such she was an unwitting first for women – the first to be hanged by the United States Federal Government. It was she it seems who instructed a fellow conspirator to prepare the guns used in the assassination. After the event, the shooter John Wilkes Booth stopped at her tavern where he was given whiskey and pistols. Many believe that she was arrested to try and draw out her fugitive son who was also involved in the assassination. Nevertheless she was sentenced to death for treason, conspiracy, and plotting murder. Despite appeals President Johnson did not stay her execution, saying that she had "kept the nest that hatched the egg". She was executed with three other conspirators on 7 July 1865. She is the one on the far left in the picture below. 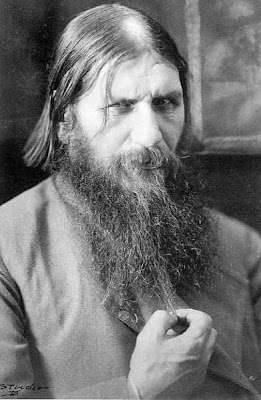 Back to Russia and the strange 1914 case of Khioniya Guseva and the most famous mad monk of them all, Grigori Rasputin. Said to be horribly disfigured through syphilis (she had no nose) she attacked Rasputin as he was leaving Church in a town in Siberia. She drove a knife in to his stomach, shouting that she had killed the antichrist while she did so. However, she hadn’t and he quickly tried to run away from her. She pursued him and attempted to finish the task but he managed to grab a stick and hit her in the face with it. Not very gentlemanly but he wasn’t exactly renowned for his manners. Narrowly avoiding being killed by a mob that had gathered she managed to turn herself over the to the authorities and was committed to an asylum. Rasputin survived but was successfully assassinated two years later. It is not known when she died.

Some people don’t like modern art, but to try and kill one of its most famous exponents is taking it a little too far. Not that the events of June 3 1968 were precipitated because of that - far more likely it was a case of professional jealousy instead. Solanas was a radical feminist writer who had been closely associated with Andy Warhol and his famous Factory. She shot him as he left the Factory, also shooting a critic Mario Amaya as well. Warhol almost died and had to ear a corset for the rest of his life to stop his injury from getting worse. Even though she almost killed him Warhol refused to testify against her. She got three years. She died of emphysema at the age of 52, having been in and out of mental institutions since her release.

Martin Luther King Jr had an attempt made on his life by African-American Izola Curry at a book signing in Harlem in 1958. Had she succeeded the Civil Rights movement would have lost one of its primary movers before it had had a chance to properly get going. Fortunately her choice of weapon was a letter opener but it could easily have killed him. It lodged inside him and it was several hours before surgeons worked out how to properly and safely remove it. King was typically forgiving


King recovered in hospital (see above). His press release said ‘I felt no ill will toward Mrs. Izola Curry and know that thoughtful people will do all in their power to see that she gets the help she apparently needs if she is to become a free and constructive member of society’. The authorities were less forgiving. Curry was judged to be unfit to stand trial and was committed to a psychiatric institution for the rest of her life.

Not quite one in the eye for dictators everywhere, but almost. Gibson tried to assassinate Mussolini, the fascist leader of Italy, in 1926. She shot him while he sat in a car he had just given a speech on the wonders of modern medicine – something he would need to rely on himself pretty shortly. She shot at him three times, missed one but hit him twice. In the nose. Yes – his nose. She was almost lynched on the spot but was arrested and carted off by the police. She never gave a reason for her actions but it was suspected that she was insane. She was deported to the UK and released, at the request of Benito himself no less. Unsurprisingly she spent the rest of her days in a mental hospital.

You left out Squeaky Fromm, another Pres. Ford would be assassin and Charles Manson family member.

Great site but your information about Sara Jane Moore is incorrect.

Moore was never obsessed with Patti Hearst. She volunteered at the People in Need food bank along with thousands others to help Randolph Hearst meet the demands of the Symbionese Liberation Army.

Moore got off one shot before Oliver Sippler grabbed her arm. She missed Ford's head by six inches usuing a gun she had never tested before. Sipple grabbed her arm when she attempted to correct the error.

Fromme went to Sacramento to get arrested, not kill Ford. She waved her gun around to get the attention of the Secret Service and get attention for Charlie Manson.

Geri Spieler is the author of "Taking Aim At the President: The Remarkable Story of the Woman Who Shot At Gerald Ford," Palgrave Macmillan.

If you read Katherine Neville's historical fiction "The Eight", you'll enjoy a fun twist on the Charlotte Corday story. One of my toip five fave novels.