They didn't call it a recession they called it The Great Depression and Dorothea Lange was there to capture the hardships suffered by sharecroppers and itinerant migrant workers on the West Coast.  She had originally been a studio portrait photographer - and her work does betray her beginnings in the art.  However, her new subjects were a far cry from the middle class ladies she was used to. 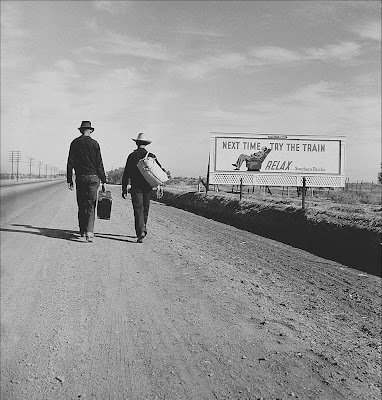 
A startling juxtaposition of migrant workers and a billboard advertising the American Dream which had gone so wrong for so many.  As the men trudge towards San Francisco, carrying possibly everything they own, the poster exhorts them that next time they should really consider taking the train.  A photograph taken ten minutes later would have, one hopes, have shown the billboard in flames.  It is this sort of imagery though, that married with the written works of Steinbeck, Evans and Agee created the image of the USA during the Depression that we still associate with it today.

Written by
Posted by RJ Evans at 20:36
Labels: Photography

RJ,
Dorothea Lange is a photography I am definitely interesting in. I had a small incite into her work while studying at Washington State University. You did a wonderful job describing who she is as an artist and what she was trying to create with her work. Well presented my friend:)
Bless you,
Chris

Sorry for the spelling error.Photography should be photographer but I could not change that after submitting my comment.

i actually adore your own posting way, very helpful,
don't give up as well as keep penning mainly because it just very well worth to follow it.
excited to see even more of your own content articles, thankx :)

I am not going to be original this time, so all I am going to say that your blog rocks, sad that I don't have suck a writing skills