The Wonder of Lasers 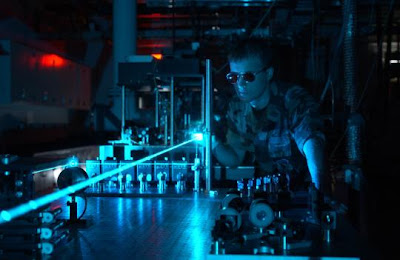 Lasers are everywhere and have a multitude of uses both civillian and military. They are used to educate and entertain but also to help destroy and kill people on a large scale. Whatever science we have, it always seems to be used for both the good and the bad. Here, takes us through the almost bewildering amount of uses to which we have put this technology.


Instruments called laser gyroscopes use laser beams to detect changes in direction. These devices help ships, airplanes, and guided missiles stay on course. Another military use of lasers is in a guidance device called a target designator. A person using the device aims a laser beam at an enemy target. Missiles, artillery shells, and bombs equipped with laser beam detectors seek the reflected beam and adjust their flight to hit the spot where the beam is aimed.