Would they ever get away with adverts like those below today? Judge for yourself. Of course, the exploitation of women's bodies continues but in more prudish times the ladies tended to be more fully clothed. It was their societal role expectations that advertisers mostly exploited in the way back when, plus the fact that apart from the family and kitchen profound thought from their direction was neither expected or wanted. 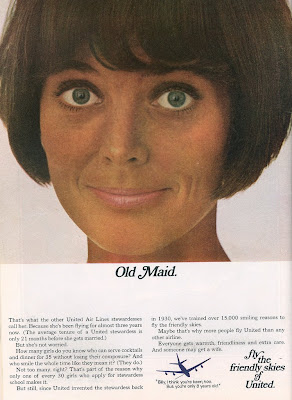 Let’s start in the mid nineteen sixties, that decade of decadence and liberation. Not if this United Airlines advert is anything to go by. The airline industry has long since been noted as being at the vanguard of equality between the sexes, so this advert is somewhat out of place, really. OK, maybe not. It seems that air stewardesses, as they were then called, only lasted about twenty one months in the job before they were married and this hints that the little hoes find them in flight. And wasn’t child labor illegal in the sixties, because this ad is looking for girls? Never mind, I think I will go away and write an article about the uniforms worn by air stewardesses. I am going to call it The Unwearable Brightness of Boeing.


Not quite using sex as weapon in the search to increase sale - the couple are already married after all. But, oh dear. Dad has been hanging around the barracks and neglecting poor ol’ Ma. Young Georgie takes some teasing from the local kids and Ma finds out it’s all because she has bad breath. A quick trip to the dentist and Dad comes back, raring to go. Obviously the words latent and homosexuality were never brought together by the ladies in those days. Odds on Dad is back at the barracks before too long, lovely smelling breath or not! 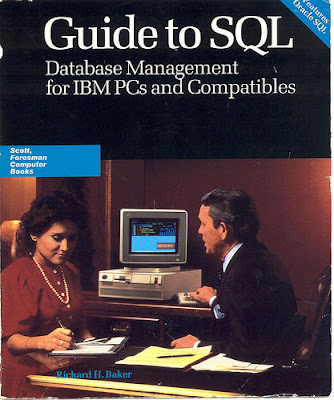 Ah, the Golden Age of computing when ne’er a female finger touched the keyboard, unless it was to type out memos and letters, of course. When it came to SQL that was obviously beyond the ken of the female of the species, whatever Grace Hopper may have had to say about it! Notice the positioning of the woman, adoring and submissive. We know who has their finger on the spot here – and it ain’t marked G for sure. 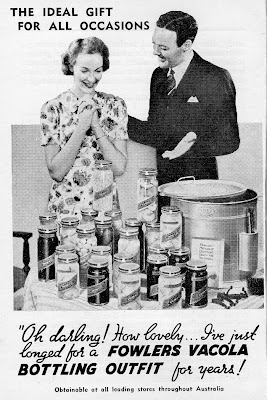 The days when a woman knew her place (and that was in the kitchen) are long gone. However, the look on this woman’s face does say a lot (we can only hope). She looks like Bree Van de Kamp from Desperate Housewives (maybe it’s her mother). The look on her face expresses delight but below the surface is rage, tumultuous yet cold, and a single question. Where the hell did I put the kitchen knife? 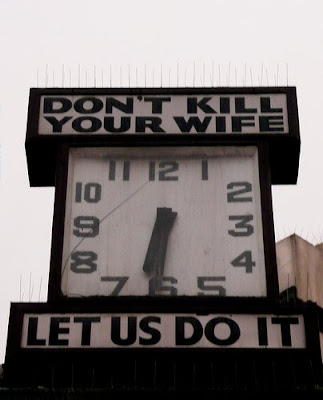 Outside of magazines and books for a moment, an anachronism in the East End of London still raises the odd giggle. Who would dare advertise their shop in this manner any more? Still, this may be forgiven by being such an old feature of the place. Oh, and in case you are wondering – this is an advert directly above a launderette. Yes, we still have them in the UK. 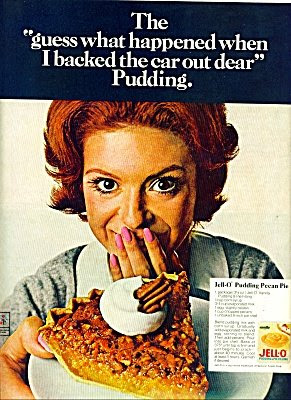 Jell-o, the stuff of life and here the stuff of forgiveness. When you have backed the car out and hit the teachers and kids from the local kindergarten in a proto-Serial Mom moment, you know that hubbie will forgive as long as you make him a great big heart attack inducing cake. Laced with cyanide.

BO – it is a while since that term was used in advertising, and quite often it was associated with the hairier gender (so half of you are asking which one is that, let’s leave it to you to decide). However, it can affect everyone and seriously damage your chances of getting married. A few bars later, however, and you will be waltzing in to church. Aisle Alter Hymn (or in English, I’ll Alter Him). One can only hope this young lady threw the soap in the bin when she got the ring on her finger. Suspect not, however. 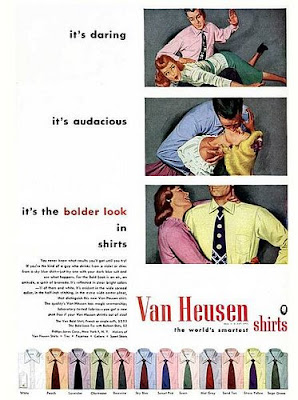 Of course it's all playful and the girls love it really. 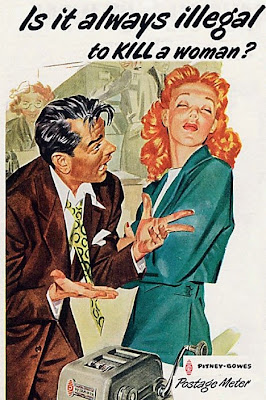 Quite what happened over the coffee maker is anyone’s guess but our mate Bree is back again and she isn’t having any of it. However, the chap’s question is one that still pops up from time to time. Not, however, in advertising.


Let me give you a little something with your breakfast, darling. Is she offering, or do I just have a dirty mind? Answers on a postcard, please!

Remember, ladies, that if you fail to bag a man, like Mom says, it is all your own fault. However, if you change your toothpaste and visit a dentist, a bright future beckons.

Good read thanks. These ads make me smile, my husband would get a hernia if he tried to put me across his knee!

Boy, thank God I was born in '88- I wouldn't have made it through those days at all!

My wife rules my roost! That's fine with me, less responsibility. LOL!

What a collection. Can't help it! I'm sending this link to a feminist friend of mine!

Great stuff. Shocking really to see how we viewed women then versus today (and still we have far to go)