Fanciful Fads of the Fifties

They developed quickly and spread like wildfire. Some were gone within months and others are still around now. Here is a selection of the fulminant fads of the fifties. 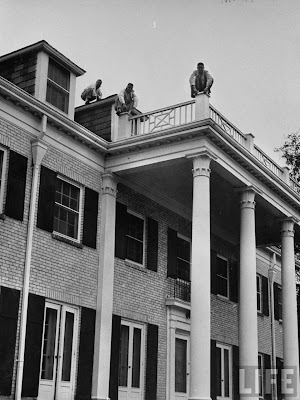 One of the stranger fads of the fifties, hunkerin’ began life an innocuous form of protest. There had been a shortage of chairs at the University of Arkansas and to highlight this the students hunkered. Very soon it had taken hold across the whole of the US and after that the world. Although, obviously, people had been hunkerin’ for millennia this was the first time the activity had been spread as a form of fashionable posturing. The coolest places to go a hunkerin’ were on the top of phone booths and cars. However, you could do it just about anywhere you wanted. 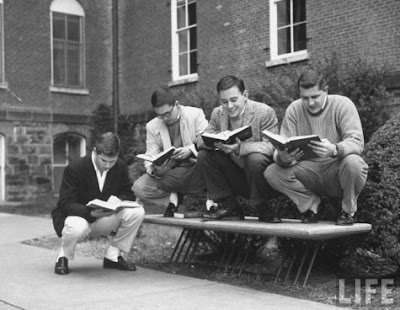 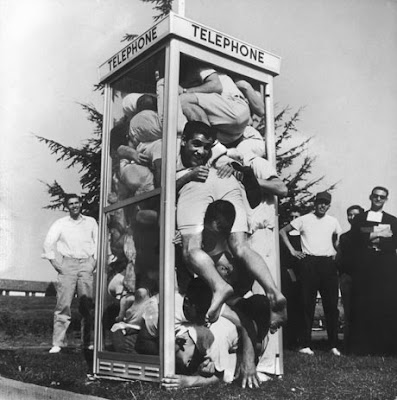 Starting in South Africa, phone booth stuffing soon spread to the campuses of the world with many having slight variations of the rules and regulations involved. Sometimes up to twenty five people would manage to cram in to a single phone booth and although there have been attempts made at the record, it seems that twenty five is the maximum reached. The fad blew over within a year – how many times is it fun to squish yourself in to a confined space with other smelly teenagers? Every decade or so, it seems. The fad just keeps coming back, but with the advent of the ubiquitous mobile phone, are its days numbered? 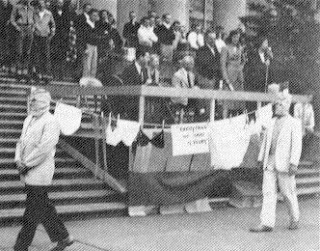 Oh dear. This may not be classifiable as fantastic these days, but although times change, the mind of the post adolescent male never really does, whatever the century or the decade. Although many men have been successfully prosecuted for doing this individually in the fifties if you were at university and a male (usually en masse), you could do this with certain impunity. Many of the raids would involve literally thousands of males who would raid the female dormitories in search of panties. Often the said underwear would be flung out of windows on their approach, not to put the men off but to encourage them.

The panties would then be paraded around the campus. As mixed dormitories became the norm (and I suspect women gained more of a sense of self respect) this fad died out. It cannot be imagined that this fad could ever be rekindled without the launching of a million lawsuits. 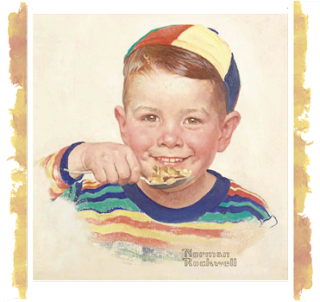 Although invented decades earlier, the Beanie saw a revival in the fifties that became a huge fad. Its most popular fifties incarnation was the skullcap consisting of four to six panels sewn together to form the cap.

The caps were most likely to be of different colors and were popular with college fraternities.

Soon falling out of popularity, the beanie was seen as the ultimate in nerd-dom until it was revitalized as cool in the nineteen ninetees. 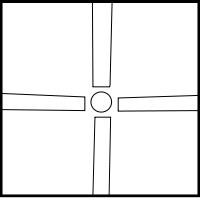 In 1953 Roger Price brought out a book called The Droodle – supposedly a combination of the words doodle and riddle. A minimalist approach is essential here – draw a square box and insert some abstract pictorial elements. Hence the four elements regard an orange to the left. The droodle soon took off and within weeks of the book’s publications everyone was creating their own and infuriating and sometimes entertaining their families and friends with them. 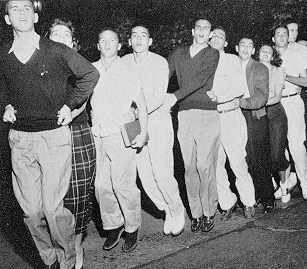 Dance crazes come and go and the fifties saw one or two strange ones. The Bunny Hop is basically a variation of the conga and is perfect for adolescents as it involves holding on to the hips of the person in front of you. The floor is tapped twice with the right foot, then the left. Then there is a hop forwards, then back one, then three hops forward and the sequences is finished. As in the conga, the first person leads. The gender of the person in front of you was irrelevant so it could be done by same sex or mixed groups. 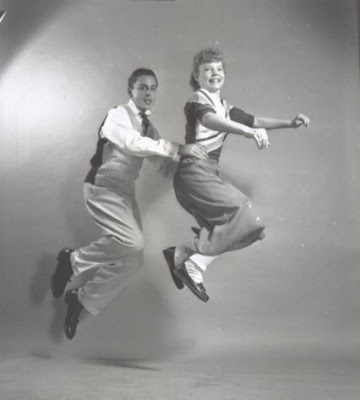 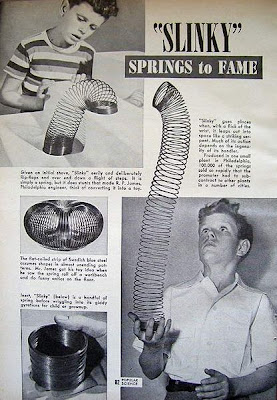 Although invented and popularized in the forties the Slinky really took off as a fad in the fifties. If you have never come across one you have been living in an as yet undiscovered rain forest as this helix-shaped toy that can travel downstairs end-over-end as it stretches and re-forms itself with the aid of gravity and its own momentum is still as ubiquitous today as it always has been. The fifties saw the introduction of many Slinky related offshoots such as the Slinky Dog which only served to heighten its popularity. Others the Slinky train Loco, the Slinky worm Suzie, and the Slinky Crazy Eyes. 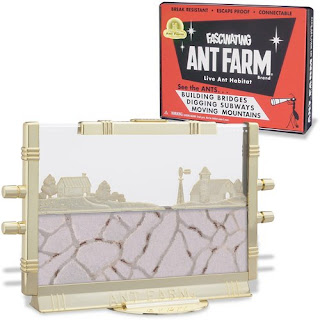 Much to despair of mothers by the last nineteen fifties the ant farm, or formicarium had become a major fad amongst the young. The effectiveness of the experimental and educational toy to create a real ant colony is dubious but that did not deter the youth of the nineteen fifties.

Most of the ant farms contained a coupon which had to be sent through the post and by return the customer would get the ants. Although the formicariums of today are much more sophisticated than the fifties versions, this ‘toy’ would stimulate the minds of millions of young people way back when. 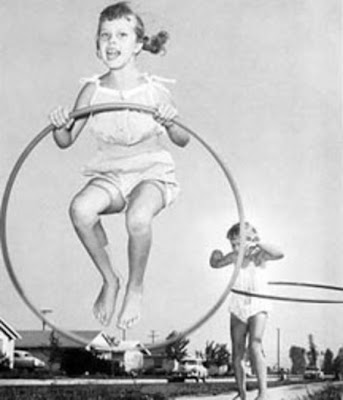 Something which became popular in the fifties and still has occasional revivals is the Hula Hoop. Part of the frenzy surrounding all things from the south seas, the hula hoop is actually nothing to do with the eponymous dance. However, the movement by which it is gyrated around the body is reminiscent of it. In America alone, in its first year of (plastic) re-release the hula hoop sold over one hundred million. The fad quickly faded away but every now and again it is revived and once again we are exhorted to get fit by waddling and widdling.

The fifties were the decade when TV really took off and with it, a world of burgeoning couch 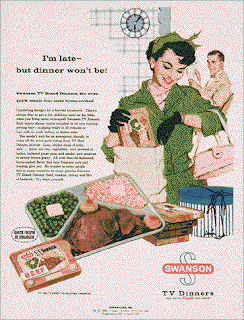 potatoes demanded something that could accompany their viewing with the lest effort possible. So was born the TV dinner. Originally, elements of the dinner would be separated in a tin tray that could be placed in the over, reheated and then eaten. Hand in hand with the TV dinner came the TV tray, a small portable table that could be erected for the sole purpose of watching and eating at the same time. Nowadays, of course, most people will plonk the dinner in their lap and instead of being warmed in the oven it went ping in the microwave. Some fads are permanent, after all.

Of course, we haven’t mentioned masses of fads of the fifties – fantastic or otherwise. Others of note include brothel creepers, neon lights and the flying disc. The invention of the juke box helped with many dance crazes too, such as the chicken dance and the hokey cokey – which we still have. 3D film and the associated glasses, as well as drive in movie theaters also lent a certain edge to the decade.

One of the best things that happened in the '50's was me LOL
Great fun article. I have an urge to get a hoola hoop now!

Great post, it shows what we have not seen in the past.
Great information

I dont think ant farms and slinkies are fads...

Ive had both in the past 5 years.