The Art of the Japanese Manhole 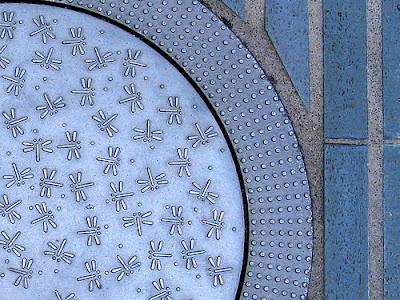 The Japanese have a wonderful relationship with their manhole covers: they treat them as art. Here is a selection of the ornate, the artistic and the ever so slightly bizarre. Take a quick tour (there are two pages in this link!) and see for yourself what all the fuss is about.


The Marunouchi area of Tokyo goes on step further an instead of individually unique covers it has given them seasonal themes. Look closely and the patterns become dragonflies. Here, they represent the autumn. Dotted around the area are other covers representing the other seasons, such as cherry blossoms for the summer. In addition to the seasonal motif, the dragonfly has a special place in the hearts of the Japanese. The insect represents courage and strength, victory and happiness. Japanese legends tell of the Emperor bitten by a horsefly. That fly was then killed and devoured by a dragonfly. In its honor the Emperor called the country Akitsushima, which translated as the island of the dragonfly.