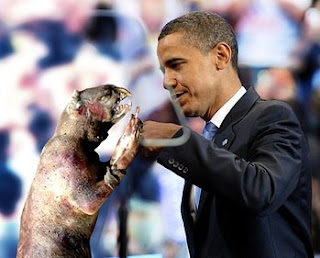 Urban myths and legends do not take long to take hold and here at Webphemera we are as fond of debunking them as we are of promulgating them. So, when recently published this article about the plethora of monstrous sightings that have happened this year, what else could we do except bring it to your attention? Of course, President Obama knows the real truth behind these sightings. Of course he does, he is the Prez!


For a second time is less than a year, an alleged corpse of something being called the Montauk Monster has washed ashore on a New York beach. Some say it may have originated in some secret animal lab on nearby Plum Island, where the U.S. Government does in fact run an Animal Disease Center.