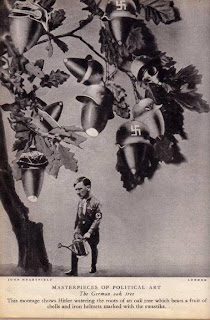 Very few people have heard of John Heartfield, the German born artist whose photomontages in the late nineteen thirties outraged Adolf Hitler. However, as part of the resistance against the inexorable rise of Nazism, he contributed some of the most biting satirical photographic mashups of the day - and all without the aid of Photoshop. Nice.

How the photomontage art of John Heartfield, a contemporary and friend of Brecht, warned the world of the rise of Hitler and Nazism. In the fight against sophisticated Nazi propaganda, Heartfield showed the Nazi regime in its true light.