Look, Look! There's Something on the Roof!

Architecture isn’t just about architects. It’s human, it’s organic – it’s all about add-ons! Here are a number that you may find questionable. Then again, you may find them wonderful, unique and a tribute to the individual in all of us. Get out of here! 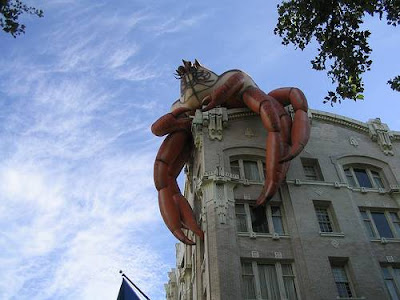 In Portland they occasionally struggle against their image as staid and solid citizens. Here, they show that they can be as mad as the rest of the world. Each year for the Rose Festival, Jakes restaurant puts this giant inflatable crab on their roof. Why? Because they can! 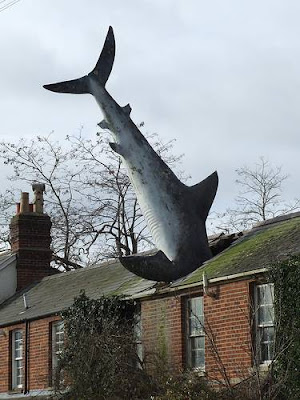 Climate change is happening, and this must be the ultimate in photographic proof that it is becoming more and more of a danger to the environment. In fact, this shark, decorously poised in Oxford, England, was put there deliberately be the owner of the house. Years of argument with the local council ensued until, after it had become a local landmark, the council decided it could stay after all! 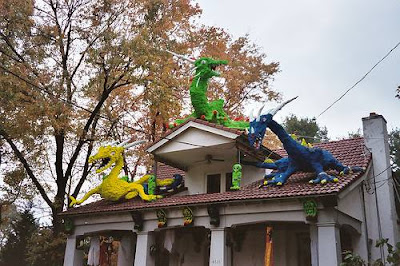 Here there be dragons! Don’t you really hate it when people don’t take Halloween seriously? Put a little effort in guys, come on! 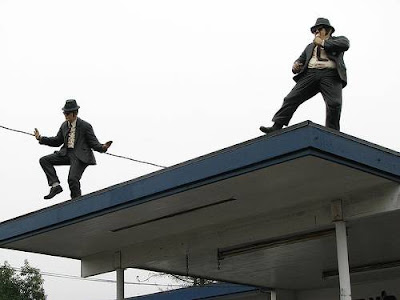 Need auto repair, then why not get down to Andy’s in Washington State? There you can also take a very quick double take as you approach. Are those the…? Why are they…? Who cares? They look great and must give every passerby a lift! Or a breakdown! 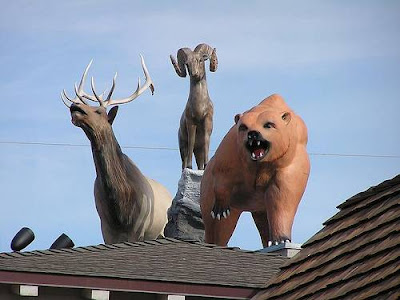 The residents of Orange County may shake their heads and wonder why, but that is doubtful. It is California, after all! Three friends audition for the latest Disney film but while they certainly get themselves seen, they fail when it comes to he cute factor. The Moose is a snob, the goat thinks he is Sophocles and the bear is just a little too grizzly. 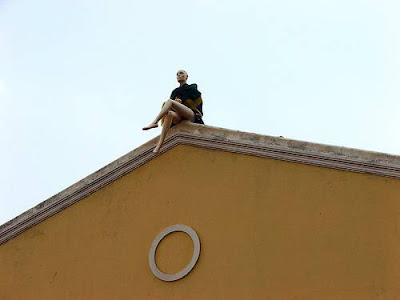 Is this urban art, making a statement about man’s condition and the loneliness of the thinker? Or is it just that someone in Salvador, Brazil thought it would be hugely entertaining to stick a show window mannequin on the top of a very tall building. With some generosity of spirit you could accept the former. Without, then it’s just a dummy on a roof, which if alive would probably be getting a grand case of the piles right now! 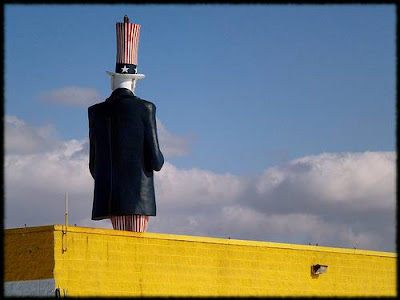 Behold, a giant am I! This great big symbol of all things American sits atop a rooftop in downtown Michigan. Nonchalant and indifferent, he doesn’t even notice that a bird has chosen to perch on his hat, from which to survey the wonders of the city (no irony, honestly!). Taken from the back because from the front, it seems, this gentleman leaves nothing to the imagination! Not so much of a gentleman then! 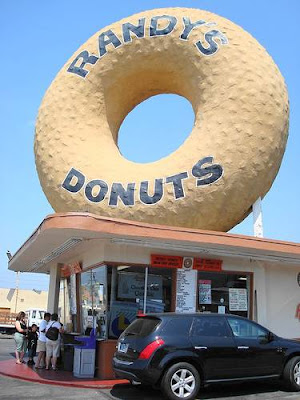 Who could leave LA without a visit to Randy’s Donuts? Not for the faint hearted (at least when it comes to the doughy stuff!), Randy’s boasts the largest ring with a hole in the city, quite possibly the whole state and perhaps the world! One can imagine it falling on a hapless Harold Lloyd who would miraculously survive the landing by a whisker and give the screen one of his slightly befuddled black and white looks! 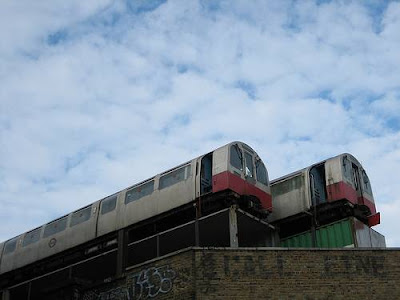 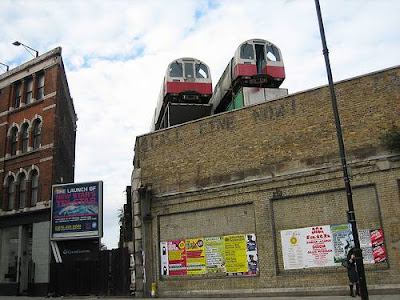 Not something you would put on the list of local amenities if you wanted to sell your flat, these two tube carriages hover precariously over the road. It looks as if they are members of a club, recreating scenes from movies where hapless carriages must speed to the end of the line before hurtling in to oblivion. Only it never is oblivion, really. Look closely and you can see Sandra Bullock and Keanu Reeves in the carriage on the left. Gotcha! 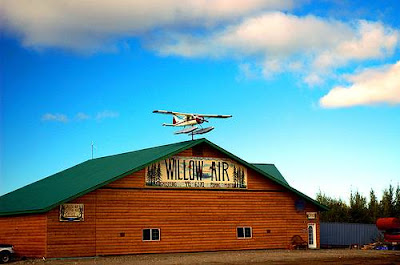 Willow, Alaska, and Sarah Palin’s private jet awaits her next political move. Whether it is to New York or in to the more and more Polar Bear free wastes of her native state, this jaunty little number awaits her every whim. Small and petit, much like the lady, it only has enough fuel for internal flights and will not venture overseas. Much like the lady. 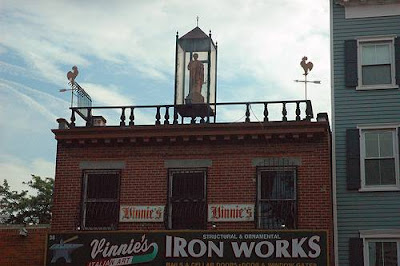 Weather vanes are not that rare in Brooklyn, but really! If you are going to kidnap someone and keep them, Fu Manchu style, in a glass container, wouldn’t it more discreet to keep your hapless prisoner indoors? This just looks like over confidence gone mad. Incidentally, is everyone in Brooklyn called Vinnie? Enquiring minds! 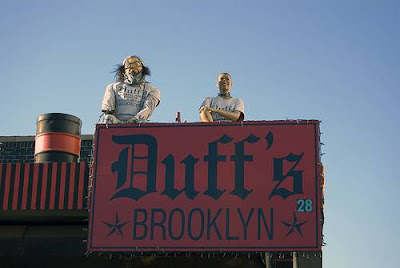 Staying in Brooklyn for a while, one must wonder whether its inhabitants have a fixation for putting stuff on the roof. Here, two young men await he arrival of their friend Homer, in the expectation of a beer or five. For the artist in you, yes, a third figure on the right would have given this bravura piece of something for no reason whatsoever a much greater sense of balance. 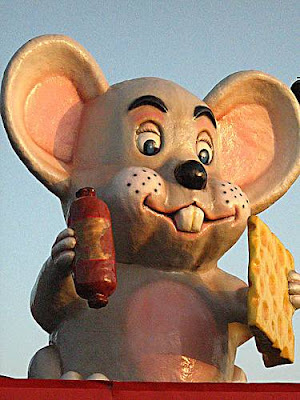 When Tom refused to continue the double act, Jerry went quickly and despondently to seed. Here he tries to put on a brave face for the visitors to a fireworks store in Wisconsin. Poor old Jerry. He was always the most vulnerable and sensitive of the pair, wasn’t he? 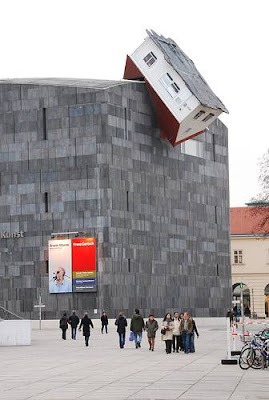 They don’t do their art by half in Vienna, Austria. This piece of installation art (and just how did they install it?) is something to take the breath away. Perched precariously on top of a museum of modern art, what sort of statement is it making? And where is Dorothy and the Munchkins? Probably not of this world any longer, as this would obviously have missed any wicked witch standing in the court yard! 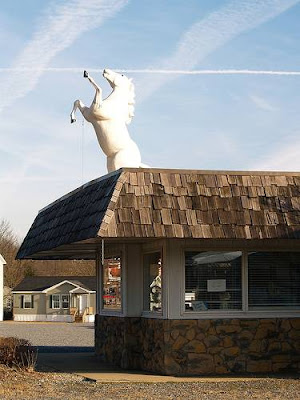 Not quite Champion, but it’s a wonder that this horse got where it was! A homage to an old Guinness ad, perhaps? Nope, doesn’t seem to be a surfer anywhere to be seen in the vicinity! To those who thought the slightly saner variety of the American species could be found in Pennsylvania, think again! 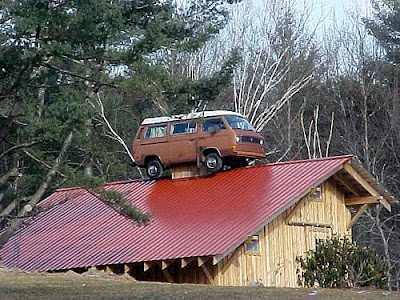 Not many people know this but The Incredibles have a second home in the country. However, they spent so much on the purchase and refurbishment of their New England hideaway that when it came to readiness to fight crime and evil geniuses gone mad, they had to skimp a little on the peripherals. Still goes from zero to ninety in three seconds flat, though! 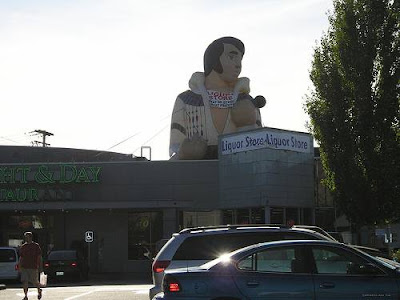 Wow!! Started out thinking it was a Bo Jack submission with the shark in the roof. Bizarre finds!

When roof become a showcase.

I have the two blues brothers ones in my lounge...maybe the roof would be better! ;0

Cool. Lots of creativity. Of course we can argue about tastes, but definitely beats the "standard" houses any day.

Pretty nice post. I just stumbled upon your blog and wanted to say that I have really enjoyed browsing your blog posts. In any case I’ll be subscribing to your feed and I hope you write again soon!