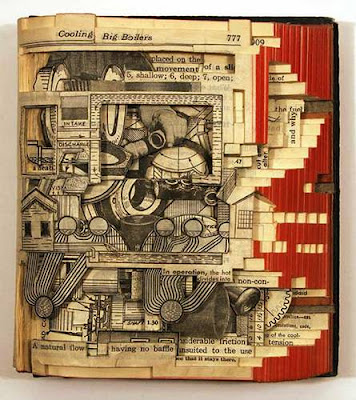 Old encyclopedias sit on the shelf and gather dust with no one much to bother them. If they had minds and souls perhaps they would quietly despair at the disregard the vast bulk of humanity pays them as they quietly molder away. They might even become introspective and look up the second law of thermodynamics within their own pages to ascertain how much time they have left before they go the way of all things. An American artist has, however, been saving these books (at least for a while) from the vicissitudes of entropy by giving them a new form and shape – a new lease of life, if you like. 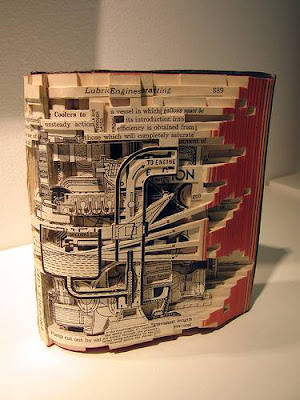 He has done this by creating what are known as “book autopsies”! The words do not form an oxymoron but raise the eyebrows with enough curiosity for the mind to demand greater clarity. Since 2000 a young artist called Brian Dettmer has been producing extraordinary pieces of fine art by performing literal autopsies on the books themselves. This is the culmination of previous works which feature language – and its communication – in a central role, an almost trackable fluidity of thought which to the onlooker only becomes so in hindsight. Only the artist could imagine how one might lead to the other! 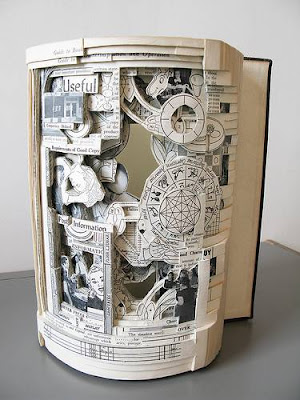 His early work involved paintings based on coded languages, such as Braille and Morse. Moving on to pasting newspaper, magazine and book pages to canvas, he would detach parts of the layers of the written media exposing what lay within. 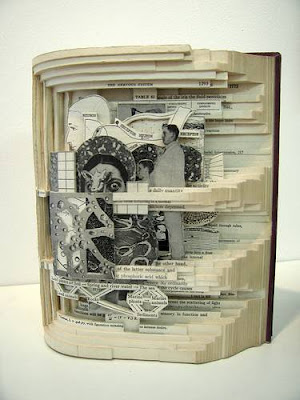 Finally his experiments with language and the written word reached its pinnacle. Using skills which could surely have led him to a career in surgery, had fate had different ideas, Dettmer skillfully makes incisions in to old books and exposes their long hidden content to the air. Although to many it is an act of vandalism to deface a book in such a way, Dettmer has brought new life to tomes that may never have been opened again, but for his intervention. The only difference now is that the ‘reader’ does not have to flick through the pages to discover their content. 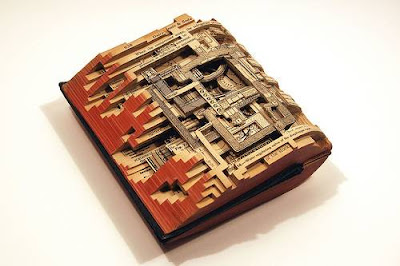 When the role of certain media decreases – or even deceases – Dettmer revitalizes their form to reveal their content to a new generation of ‘readers’. The idea behind the art is to take the ‘dead’ content and convey it again – albeit it in a radically changed format. A new approach to substance and form arises from the redundancy of the original article. So the phoenix rises from the ashes as, perhaps, another beast altogether. 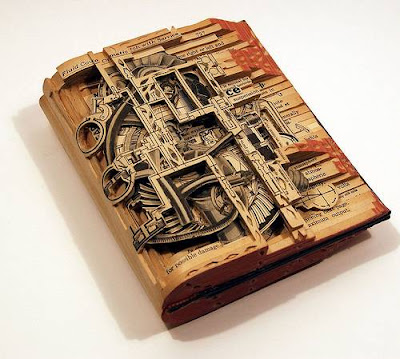 Altered states, indeed. Dettmer begins by sealing the old book and then he cuts in to it. The choice of book often seems similar in content – they contain plate illustrations which we would consider old fashioned as they are generally in black and white. This gives the finished piece a slightly macabre air of the Victorian gothic. 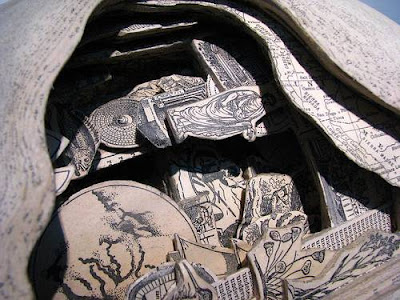 However, the imagined brutality and butchery of eighteenth century autopsies are not imitated – these books are taken apart with the skill of a modern day surgeon and lovingly sliced to reveal their innards. These are, one might conceive, the kind of books that the monsters from the “Hellraiser” films might settle down to read on an evening when they had no living souls to torture. 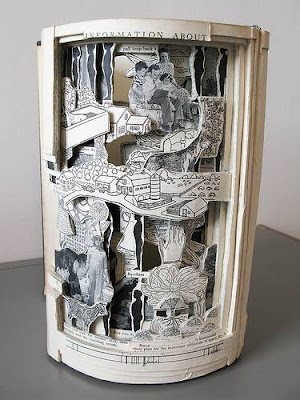 The overall impression leaves people open mouthed. The art takes on an even greater ‘gasp’ effect when it is realized that there are no deliberate inserts in the new content. Neither does Dettmer move any of the original content – they are exactly where they were when the book was first published. The intricacy of these three dimensional works is astonishing. 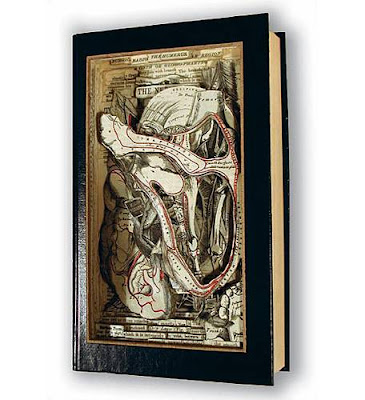 Can these pieces of work be labeled derivative? Certainly, they display and express ideas that were first put on the printed page by others. However, those others are long dead and, in no way shape or form would ever have envisaged their ‘copyright’ being breached in this manner. One wonders whether they would have approved or not! 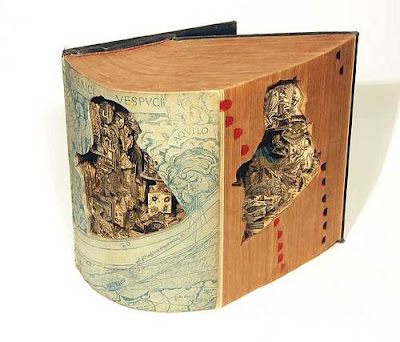 Dettmer's work has been exhibited all over the world. If you would like to see his work in the flesh, as it were, it can be found in art galleries. North Americans are by far the luckiest – perhaps reflecting Dettmer’s nationality. His work is currently on display in San Francisco, Chicago, Atlanta, New York and Toronto. If you are in Europe you would have to venture to Barcelona in order to see his work. Not that most people ever need an excuse to visit Barcelona!

These are completely amazing RJ. They must take so much time.

i saw these pieces in person at Elins Eagles-Smith Gallery on 49 Geary in San Francisco. They're very impressive and are a must see if you're in the area.

Thanks RJ for this great post. I will ReTweet it on Twitter as soon as I finish this comments.
Dettmer 's work can be understood as both Conceptual and as a form of word Art. It even verges on being Post Conceptual as it is kind of using the symbols and meanings as strokes to create a different whole.
I am founding Post Conceptual Art Theory, especially UnGraven Image a branch that uses a unique set of symbols for every stroke. So Dettmer's work is very meaningful to me, both as splendid visual art and for it's place in art history.
Thanks a lot!

Cant seem to locate you on twitter but thanks for a great comment. Colleagurs that I have shown Dettmer's work to have been slack jawed at its brilliance. Some converts to modern art I hope! Clever, lucid, beautiful, - ART!

Given the intricacies of the Brian Dettmer designs, it's highly fitting he's chosen an encyclopedia as the foundation of his introverted architecture. He calls them “book autopsies”, but that name doesn't do justice for something that breaths life like this into a dying book form.

RJ Evans, the author of this piece, writes that “his experiments with language and the written word reached its pinnacle". If that pinnacle is the crest of a wave, sure. Personally, I'm inclined to believe Brian Dettmer is already contemplating the possibilities of future waves of expression.