The Strange Case of the Sea Monkeys, the X-Ray Specs and the Ku Klux Krabs 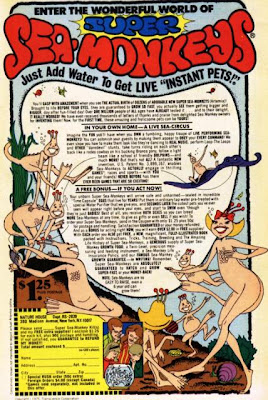 Any man-cub growing up in the UK of the early nineteen seventies had, by sheer species specific need, several (if not hundreds) of imported US comics in their lair. There, amongst the muscle-growing techniques advertised by bewilderingly middle-aged looking men wearing something approximating the man-cub’s mother’s girdle, there would be something that could, would and did excite the curiosity of the pre-teen amateur biologist. The Sea Monkey. 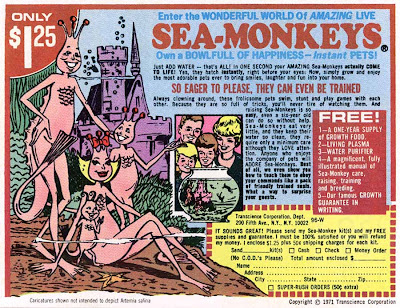 Trained? Trained my a**e! They would follow a light around, somewhat aimlessly. Tricks? The blond one with the pretty red bow never pulled any in my tank.


Marketed in the US from the 1950s the Sea Monkey advertisement looked suspiciously seductive, what with the tails laid delicately across the genitals and the nuclear family in microcosm, who could possibly fall for something so obviously fake? This particular mug for sure, who sent a British Postal Order across the pond, quite generously forsaking the then stupendously generous pound-dollar exchange rate. Amazingly, the Sea Monkeys arrived – and scarily quickly (as if some aqua-based Wonka dude was anticipating my every need) and following the in depth destructions, sorry instructions, the seeds of life were sown in suburbia, where Jacques Cousteau was worshipped but Onan ruled. 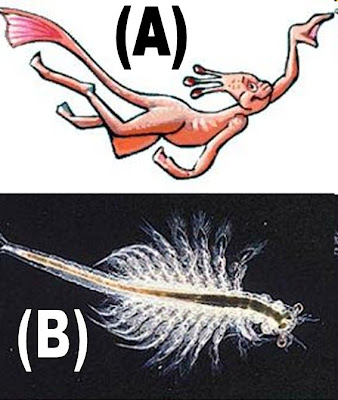 Imagine the disappointment that prevailed when said Sea Monkeys which should have looked like (A) actually looked like (B). Fortunately, the pater familias was able to come to the rescue. The brine shrimp that grew in the stead of the promised monkeys of the sea were introduced to a much bigger tank. Those seventies favorites, the tropical fish (pre-Nemo, we didn’t know they had feelings then) were always inquisitive when new companions were introduced to the tank. Especially when they were hungry. Glee ensued. Sea Monkey slaughter on a grand, almost Roman scale became the hobby of the day. Teenage Nero was born but this phase passed as quickly as the monkeys (bless them) through the intestinal guts of their marine nemisis-is (answers, please, on a postcard). 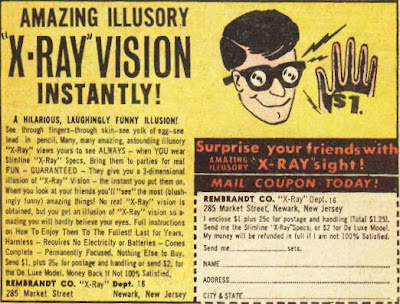 This particular dissatisfied customer swore off mail order animals from that day on. Of course, this did not signify the end of the mail or the order and fairly soon after the SMD (Sea Monkey Debacle) a pair of X-Ray specs landed in the mailbox of this particular pubescent patsy. What could go wrong – after all, they would do what the advert said they would, surely? 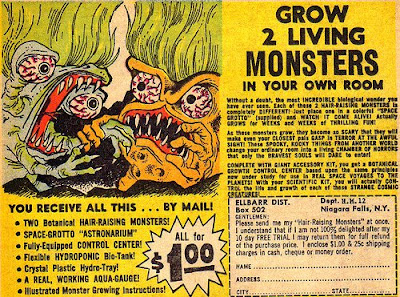 Although we have yet to introduce him, the guy who brought you Sea Monkeys and X-Ray Specs also brought you these hair-raising monsters. Ta da.

And so the years passed and childish things were put away, replaced by things normally labeled 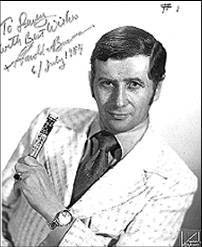 adult (but when considered at length, or perhaps not even for that long, usually have a streak of ‘kid’ in them a mile long). A sudden fit of nostalgia and a quick google (verb, noun, adjective, whatever) and the truth dawned. Despite the finest left-wing upbringing on the planet (in my home, ‘pinko’ was a compliment) I was, quite possibly, the unwitting teenage funder of extreme right wing political ideologies.

The ‘inventor’, marketer and creator of both the X-Ray specs (so longingly awaited so quickly assigned to the trash can) and the Sea Monkey (and we all know their fate already) was none other than Harold von Braunhut. The name itself suggests some sort of harmless nutty professor, but this guy was no Jerry Lewis. Were it not for his politics, his life would be ripe for a Hollywood film.

With an amazing 156 patents to his name, Braunhut (he added the ‘von’ later in life – he was actually born in Memphis in 1926) learned that through a quirk of nature the brine shrimp could survive for many years in a state close to suspended animation. When added to water, they would spring to life (to the astonippointment of a million teenagers). The first marketing ploy – ‘Instant Life’ worked but not sufficiently to fulfill those dreams of avarice filling his head and bothering the boys at the Patent Office. Coining the term ‘Sea Monkeys’ brought the product a whole new lease of life.

Although he would never engage with questions about his politics, it has been widely reported that von Braunhaut was a member of both the Aryan Nations and the Ku Klux Klan. What makes this even more bewildering (I mean, you ‘invent’ the Sea Monkeys and you want to lynch black people? Shame!) his relatives insist, to this day, that he was of roundly and soundly Jewish origins. Que pasa? 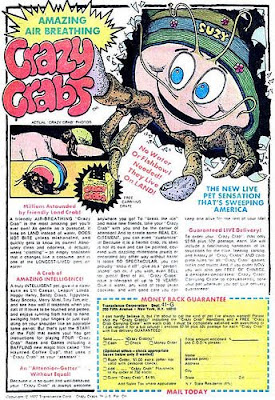 Yeah, he did these too... Inevitably, here they come... the Ku Klux Krabs. Come on, six out of ten for the article title, surely?


But there is more. Not only responsible for my temporary teenage impecunity and financial dalliance with politics of which I was only vaguely aware, this chap (replace with the noun of your choice) was also responsible for Invisible Goldfish (not even I fell for that one), Amazing Hair-Raising Monsters and Crazy Crabs (all of which were suspiciously dissimilar to the speel).

Whether Jewish or not, whether a lynch-em-up card-carrying KKK member, there is one thing that has to be admitted. This man had chutzpah – or just plain old fashioned balls if you prefer the Anglo-Saxon.

But I still want my money back.

For those of you who find this story a little incredulous, try his Wikipedia page as a good start to investigate the lives and times of Harold von Braunhut.

What would be great here is some idea as to where any of this info came from.
even something as flawed as wikipedia, or wikinfo.
interesting subject but there is seemingly still alot to know.

Yeah, -we did the 'seamonkey' thing too RJ. Turns out, my older brother is deathly allergic to something in the brine shrimp and we ended up dumping the whole mess.
The X-ray specs were a kewl device. Too bad that they were marketed as such, for their 'magic' was the light-scattering ability of peering throw the dense fronds of a bird feather! The 'lens' was a hairy, stringy bird feather glued over a 'pinhole.' It obfuscated the incoming light and it did make one's hand appear very 'bone-like.' I thought it was neat and surely worth the dollar I'd spent on it. But walking up to my sister's best friend wearing these and gawking and gasping at her breasts with a big smile on my face? -Priceless!