No, no, we're not getting all religious, and if we were, then I doubt very much whether we would tell you where to find 'The Devil's Sites' on the internet. This fascinating article by is all about those places in the world named after the gut from downstairs. The first is the Victoria Falls. 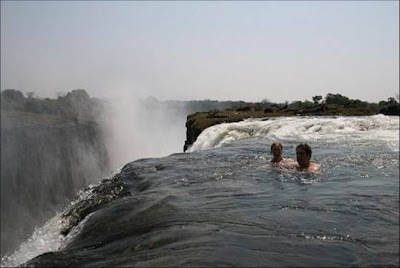 
A natural pool was formed near the edge of the waterfall and during the dry months of September and December, the river flow is at a safe level that people can swim as close as possible to the edge of the falls within the pool area. A natural rock wall keeps them from falling into the 360 feet gorge. It is safe enough that some people actually let their kids join the experience of a lifetime.

Written by
Posted by RJ Evans at 13:50
Labels: Bizarre, Places