The Schmidt Sting Pain Index: How Much Could You Take? 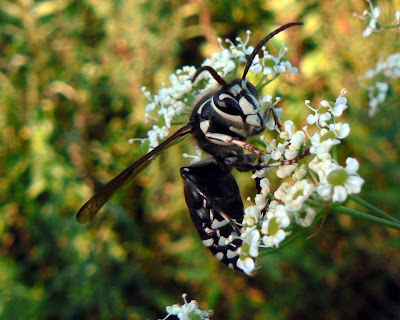 Does it hurt when a bee stings you? Would you like to know what sort of pain you are going through on a scale? An American entemologist has created a pain index, going from one to four. One is the least stingy sting and four, well - we will leave it up to your imagination! Take a look and see how much you could take.

The Bald Faced Hornet is an imposter! Not for being on this list, of course, but because it isn't really a hornet at all. It was one of the yellow jacket species of wasps found in the United States and Canada. It has an exposed aerial nest which is reminiscent of hornets and that is why the name stuck. You can find this black and white beasty in its nest which can often reach three feet tall. It is the female workers rather than the drones that possess the sting and it comes in at half way up the SSPI at 2. Schmidt gleefully tells us that this one is "Rich, hearty, slightly crunchy. Similar to getting your hand mashed in a revolving door." Aah.

Written by
Posted by RJ Evans at 11:24
Labels: Fauna, Insects

Sting season has begun! Learn how to cure stings instantly at http://www.beestingcure.com/order