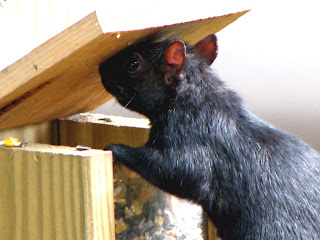 For many people outside of North America, the existence of a black squirrel would raise an eyebrow or two. However, they are bcoming increasingly common in Canada and the USA, as this article reports.

This is the black squirrel. Out of the squirrel population of the United States and Canada perhaps only one in ten thousand is black. However, this is not a separate species in itself. It is in fact a sub-group of the grey squirrel and, little by little their numbers are growing. In fact in some areas they outnumber the greys. However, this black coloring is not a recent trend among the squirrel community - research indicates that in the days before the European settlement of the America the black squirrel was probably much more numerous than the grey.