So, when do you think that colour photography was invented? The nineteen thirties perhaps? Well, that is what I would have said, but in fact it was decades before. Here is a selection from a visionary Russian photographer. Amazing work, from a time before the First World War, before the Titanic sank and before the first commercial freight air flight. 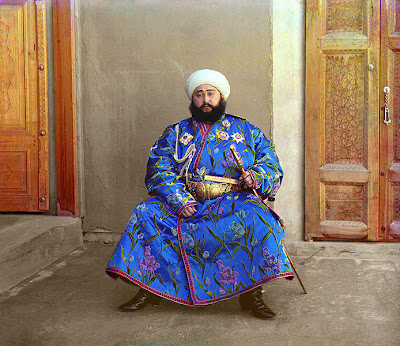 
Russia was not just Russian when Prokudin-Gorsky took his pictures. Above is the Emir of Bukhara, in what is now modern day Uzbekistan, taken in 1910. The gorgeous colors of his robes indicate his importance. Prokudin-Gorsky died in 1944 in German occupied Paris. The times he had recorded, of the Tsar and his empire were long gone. However, he recorded for us and the world a time and a place and left behind a unique and wonderful archive that still astonishes the viewer today.

Written by
Posted by RJ Evans at 14:44
Labels: Photography, Vintage