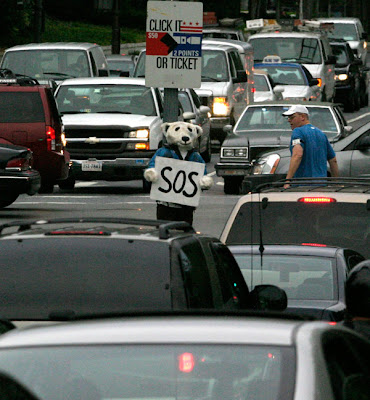 Artist Mark Jenkins, best known for his packing tape models, has recently been causing another stir on the streets – this time in Washington DC. Motorists were surprised to see a somewhat disheveled looking Polar Bear signaling his distress to the passing traffic. The bear was one of a series of life-sized installations which were scattered around the city. The aim was to call attention to the plight of the Polar bears, who are losing enormous areas of their habitat due to global warming. Each year the ice on which they live is gradually diminishing and this is threatening the whole species.


Written by
READ MORE HERE
Posted by RJ Evans at 14:16