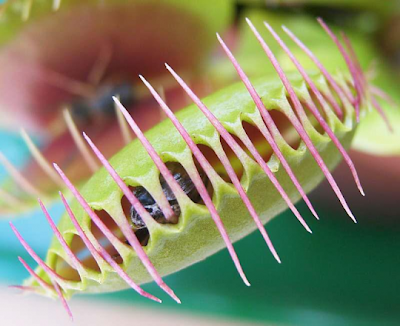 These are exciting, intriguing, and fascinating strange plants that eat animals.

Written by
Posted by RJ Evans at 23:22
Labels: Flora, Flowers

Nature is so wonderfully weird!!! This is a good read.

I love flytraps. I think though, that they only grow in one small part of a southern US state (on poor, sandy soils.)

Here in Ontario, we have Pitcher Plants that grow prodigiously in certain swamps. There is a swamp 'just off of the Q.E.W.' that I have seen photos of, that show meter-tall pitcher as far as the eye can see. The posteee whom photographed that wrote that he 'walked off into' this, went waist-deep in mud & muck and might have drown, but managed to free himself. He took some photographs to show, and wrote that he refuses to disclose the exact location because he does NOT want 'collectors' to go in there and start pulling-up specimens.

Anyway, -one CAN buy many species of Pitcher Plants here in the summer months, established and in hanging-pot arrangements that you can barely get your arms around!
I have never had much success growing Pitcher Plants, -they are like Chameleons... some people CAN do well keeping them. I am just not so lucky... (I mention Chameleons because I used to raise Bearded Dragon lizards for fun, hobby & profit back when I lived in New York..)