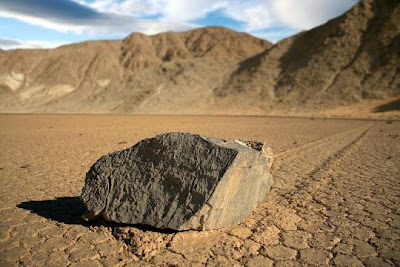 Stones that change position? Well, it isn't going to be Keith Richard, probably, but these weird objects in Death Valley. They still elude proper scientific explanation, but Bren Parks puts her sun screen on and takes us for a tour of their home. My grandmother used to say 'stranger things happen at sea' but I am really not sure this time...


In an area known as the "Racetrack playa" in Death Valley near the western border of Arizona , there are an amazingly large number of stones, ranging in size from mere pebbles to half ton boulders that regularly travelby themselves and no one has ever been able to explain why!