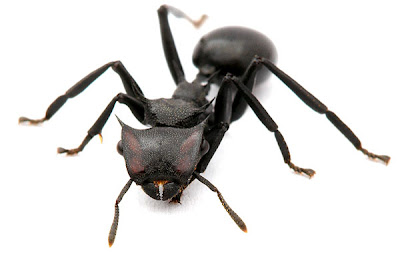 Their skills eluded observation until early this century, but you can add another animal on to the list of those who have developed the ability to glide. Joining snakes, squirrels, frogs and lizards with those superhero-like gliding skills is a species of ant. 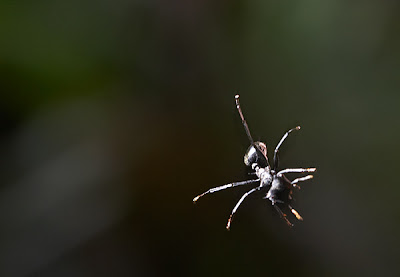 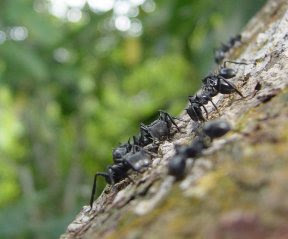 And what an Ant! The Darth Vader of the entire insect world, Cephalotes atratus, inhabits the canopy of the tropical forest systems of Central and South America. That’s a long way up and if an ant was to fall it would lead to almost certain death on the floor of the forest. Either that or a trip that would make The Incredible Journey look like a walk in the park, but one which would probably be impossible due to the lack of chemical trails to guide the ant back home. 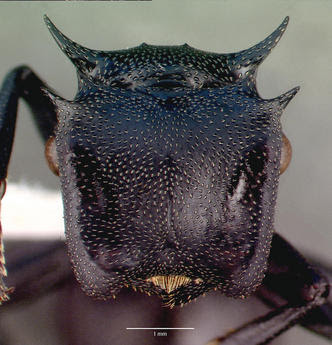 The ant is almost a centimeter long, which makes it larger than the ones we are used to in our gardens, and it has the sort of appearance that would make many a casual gardener run for the comfort of the house. With its spookily long hind legs it looks scary enough, but the flanged head shield gives it the look of a certain Jedi gone bad. One could almost expect it to hoarsely rasp the odd dark side aphorism. Yet it is probably these features which have evolved over time to enable the ant to glide. 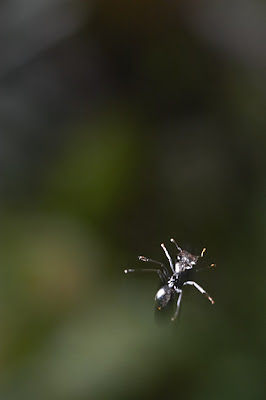 Cephalotes atratus or the Gliding Ant has been known for a long time but their gliding ability was first noticed – in a kind of insect ecology Eureka moment by University of Texas Medical Department member Stephen P Yavoniak in 2004. While hanging around in the canopy waiting for mosquitoes to bite him (for research purposes rather than the fun of it) he brushed several dozen ants from him and noticed something odd.

Instead of falling randomly away from the tree the ants formed a mini cascade and landed right back on to the bark. Intrigued, he then painted the hind legs of some ants with white nail polish (perhaps part of the usual insect ecologist’s kit?). The ants were found to come at the tree backwards hit it and then hang on for dear life. While most ants were successful some would fall down the tree a little farther. A few would plummet down to the earth (seems a shame, but this is science). 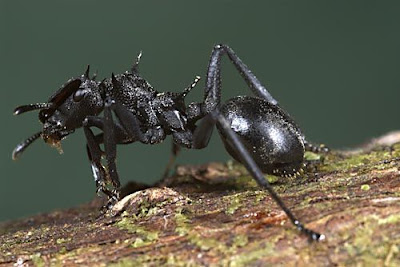 Even more unbelievable, these gliding ants can turn through one hundred and eighty degrees in mid-air. By executing this hairpin turn while gliding (what the scientists call directed aerial descent) through the air they can have a second attempt at reaching the trunk of the tree again. 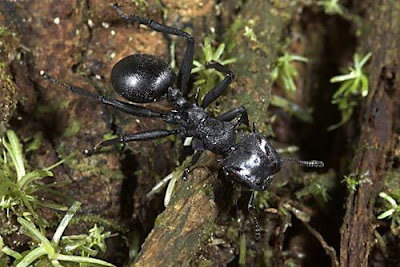 Further studies revealed more about this remarkable achievement of evolution. If the ants were simply to fall and simply keep their antennae crossed that they would land back on the branch, only five percent would do so. The gliding ant success rate, however, is a whopping eighty five percent. 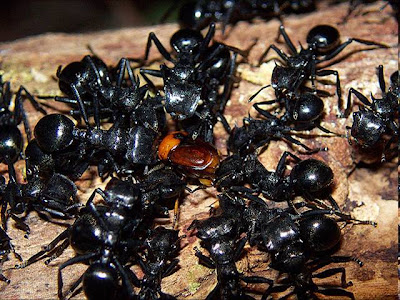 The advantages of being able to do this are fairly obvious. The ants weigh so little that a gust of wind can blow them off the tree. Also, there are animals such as monkeys who may inadvertently knock them from the canopy. They may even fall off in the scramble for the next meal, such as the dung beetle above. Yet there is even evidence to suggest that the ants fling themselves off the branch in order to avoid predators. That is one confident ant. 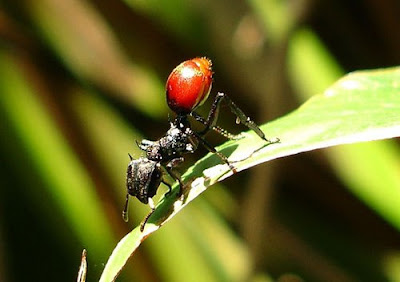 There is a downside for the amazing gliding ant. It is prone to attack from a parasite, which transforms its abdomen in to something resembling a ripe berry. This change to its morphology is an intensely clever ploy by the nematode (roundworm) to make the ant an attractive snack for a berry eating bird. Thus the parasite gets to introduce itself to the bird. For which it is the most unpleasant demise, bird or ant, I will leave to you.

Yuk,we have big ants in Cyprus, bigger than I was used to in the UK, but these look even bigger! Great article

Wow, what an incredibly interesting ant; very well written too. Usually, I find myself returning to what I was doing when I stumbled upon the slightly more interesting fare. But, to be honest; I read the article the whole way through. Well written and you have a star subject too.

Very enlightening and beneficial to someone whose been out of the circuit for a long time.