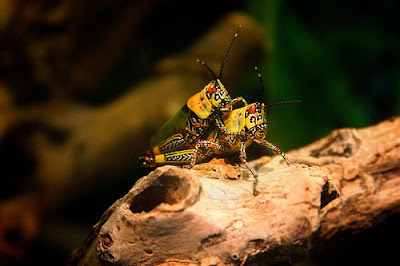 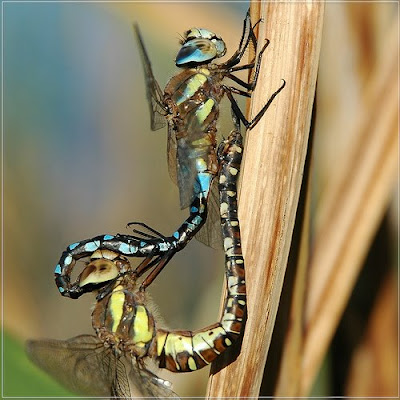 A pair of Migrant Hawkers mates, the fantastic coloring of their bodies coordinating so well with each other. Found in Sweden, this dragonfly is known there as Höstmosaikslända which translates to “Fall Mosaic”. A rather beautiful name for a rather beautiful creature. 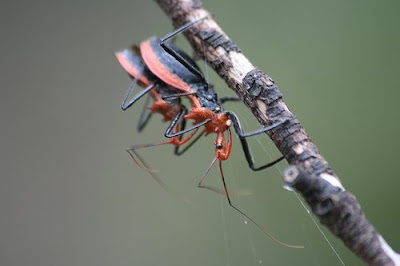 The appropriately named Assassin Bug which looks as if it would give any Ninja a run for its money! They feed mainly off other insects but have been known to have a go at other species, including birds and, oh, us! Found in tropical regions, they are making inroads in to Europe and North America as the climate becomes warmer. 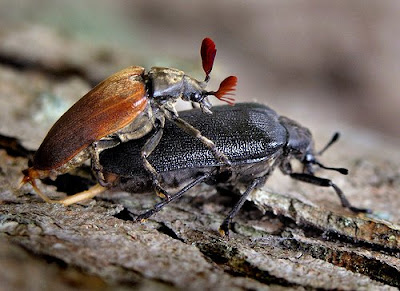 These Cicada Parasite bugs may look as if they belong to different species but it is quite usual for male and female insects to be startlingly different from one another. The larger one is the female and the brown one doing the work is the male. Found in the USA, they are otherwise known as Cedar Beetles. 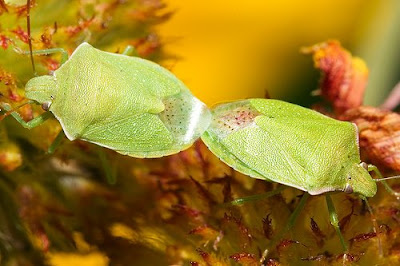 The sex of the Southern Green Stink Bug, however, is almost indistinguishable to the untrained eye. Fortunately they have no problem with recognizing each other. They are so called because, yes, their smell can only be described as malodorous. Classified as a pest, these bugs attack many important food crops and are thought to have originated in Ethiopia. They are becoming common in Europe, Asia and the Americas. 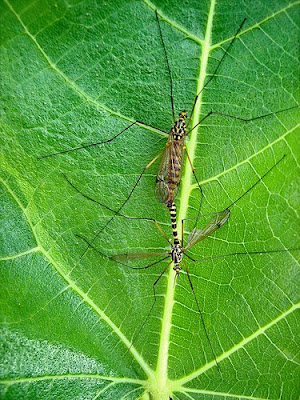 The much-maligned mosquito has many different species all over the world. Noted for their slender body and long legs they are the Size Zero of the insect world. As a vector agent they carry parasites and diseases from person to person and so are not the most popular insect on the planet. Blissfully unaware of their reputation among the higher mammals, this pair carries on the circle of life quite blithely. 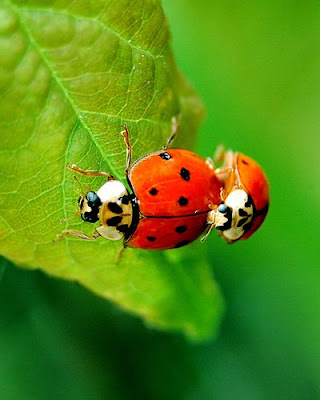 The Lady Bug or as it is known in the UK, the Ladybird should have a worse reputation than the mosquito as it is a voracious killer and devourer of its prey, the greenfly. However, its primary coloring (although red should signify danger even to us!) has given it a much gentler public image than it deserves.

Caddis flies are closely related to moths and butterflies and as such mate in a very similar way with each partner facing away from the other. Their larvae are, however, aquatic and can live in extremely cold climates. Their cocoons are spun from silk, just like butterflies. They emerge en masse to ensure that a male and female can find each other easily. Anglers take advantage of this by matching their flies to whatever species is emerging on the day they are fishing. 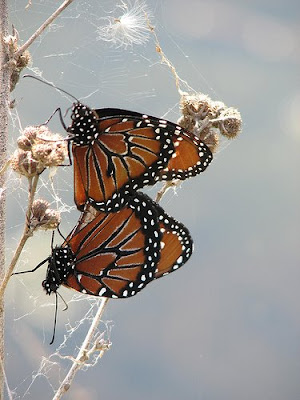 The gorgeous Queen Butterfly (living in South and North America) do not have a problem recognizing each others’ gender as the male has an endocrinal patch on its dorsal hind wings which releases scent to attract females. It uses a technique called Mullerian Mimicry to protect itself. That is, it adopts the mannerisms of the more populous Viceroy butterfly which is poisonous to birds and other animals. Funnily enough, the Queen is also poisonous but it imitates the Viceroy as the latter is much more numerous. Where the mimic is not poisonous, this is known as Batesian Mimicry. 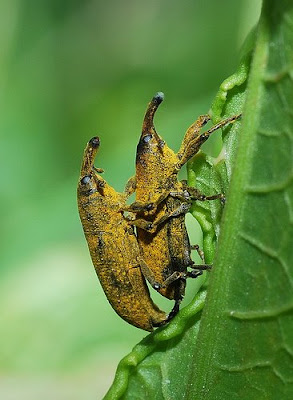 Two rotting bananas do it on a lead. This awesomely ugly creature is known as Lixus angustatus but we would call it a weevil. They are also, unsurprisingly, known as Snout Beetles and look as if they are some long lost relative of the Ant Eater. There is such an abundance of Weevil species and diversity that their classification is in a constant state of flux but you are most likely to meet one at home if you open a bag of flour! A good job that home baking is on the decline, then! 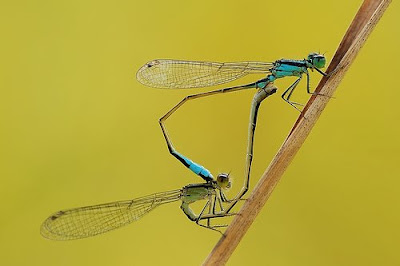 The incredibly elegant creature pictured above is the Ischnura elegans or the Blue-Tailed Damselfly and is found over much of the European continent. As its English name suggests, it has a large amount of blue coloring. Its eighth segment, however, is entirely blue and it is this which gives this insect its stunning look. The female has diversified in color and can come in pale green, violet and pink. 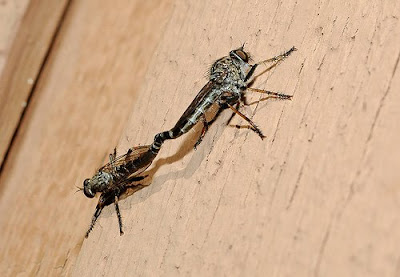 The Robber Fly, which not many people find terribly attractive, has some fun in the sun. They can be recognized by their furry moustache and each has a group of three primitive eyes nestling between the larger two compound ones. It injects its victims through its proboscis and the enzyme it produces liquefies it victim. The resulting mush can then be sucked through the proboscis. 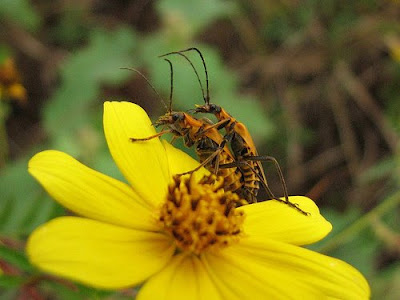 Pennsylvania Leather-wings are a beneficial insect. The larva enjoy nothing more than as many grasshopper eggs as they can get through. Some species that are native to the Great Plains in the USA are used to control Corn Earworm caterpillars which can damage crops enormously. This pair uses the natural camouflage of a Tickweed Sunflower to produce the next generation of the species. 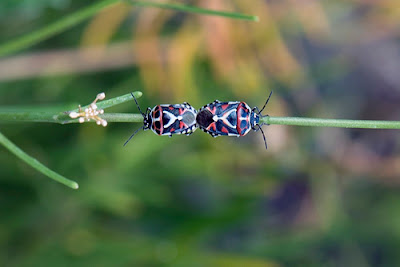 Another pair of Stink Bugs gets busy with the job nature intended. Although they are known to occasionally eat other insects, they mostly suck the sap from plants by piercing them with sharp mouth parts. Stink Bugs (from the Hemiptera order) use their stink to warn off predators. The stink is an aldehyde, which is similar to a pheromone (chemically at least). 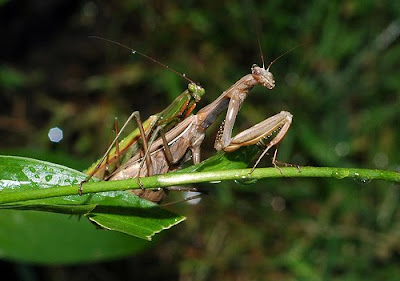 The European Praying Mantis is one of the more popular insects because of its alien appearance. The female is renowned for eating the male after mating. This is certainly true – and the male knows it. Little known is the fact that many males manage to make a quick getaway after they have secured continuance of their genetic material! 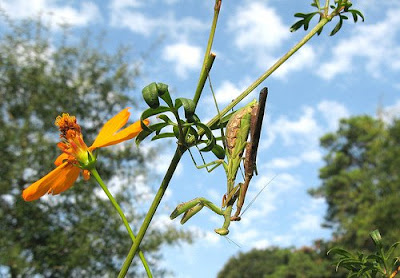 The Praying Mantis is the Kama Sutra Kid of the insect world. Whole books could be written about the positions in which they are found in coitus! 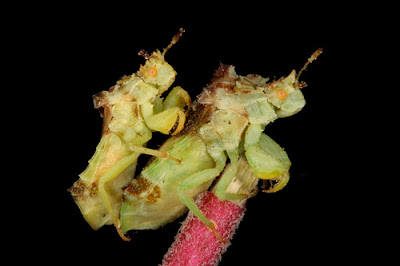 Always beware the little guys! Ambush bugs are usually about twelve millimeters in length but they take on prey which is significantly larger than they are! They are found mostly in tropical Asia and America and hide among plants from which they pounce on their prey when it gets close enough. The upper part of each foreleg has structures like teeth that mesh in to the thicker leg section. It grasps its victim in its pincers and, piercing the victim with its short beak, it sucks out the fluids. One can only hope the male, above, decides not to do it to the female! 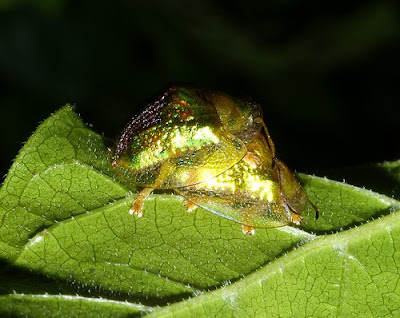 These Anacua tortoise beetles are so named because of their superficial resemblance to the tortoise. However, unlike a tortoise, what you can see here is not a carapace or shell. It is known as an elytron and is a hardened forewing. It is a protective cover for the delicate hind wings which are used for flying. In some species the fore and hind wings have become fused, which renders the beetle flightless. 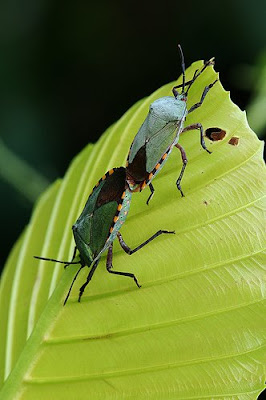 A pair of Shield Bugs – which is another name for the Stink Bug family. What is exceptional about this species is the orange and black strip of danger signals it has at the base of its ‘shield’. How often does mankind unwittingly imitate the insect world? 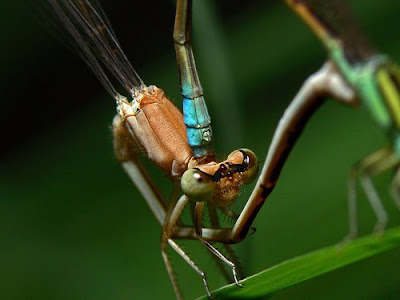 The Desert Forktail, found in the USA has found its mate. The remarkable microphotography enlarges this pair to a scary level. The Aliens and the Predators of the movie world would not stand a chance if these were to be enlarged to a much greater size! Humor aside, the unearthliness of this photo is breathtaking. 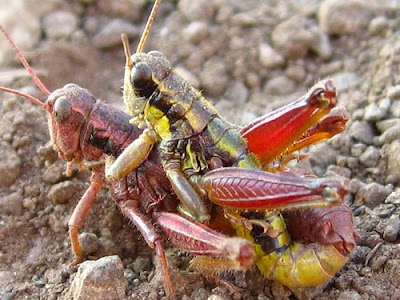 What selection of insects would be complete without the inclusion of the Grasshopper? This image manages to be beautiful, scary and creepy all at the same time.

a giant preying mantis might be my worst nightmare... especially if it tried to do it with me!

Ooer I am blushing :)

If you want to read more about mating among insects and other animals, try "Dr. Tatiana's Sex Advice to All Creation: The Definitive Guide to the Evolutionary Biology of Sex" by Olivia Judson. The sex habits of animals is incredibly diverse (and I hate to admit it, but we humans are fairly boring compared to other fauna).

Hi Iam Prabhu from chennai,joined today in this forum... :)